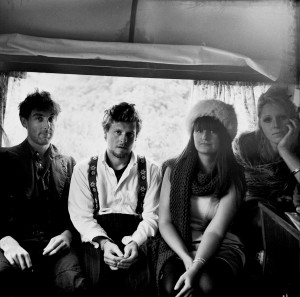 there are some kinds of music that make the curious listener very excited, no matter the mood that surrounds him at the start, the music never fails to invigorate and intrigue. This music usually has folk as a starting point, is played and created with sheer joy by the musicians and is often layered, verbally and musically. Bands like Tilly and the Wall, Los Campesinos,Tunng and now Foxpockets are often labelled twee by a jaded press who seem to like a strong spoonful of angst with their cuppa alternative, (you know the type, the ones who write in little books and are afraid to dance when the band goes mad on stage.) and oh how wrong could that label be.

This is simply music that makes one feel awfully lucky to have found it.

The Nautical Song slow builds, adding instruments and vocal harmonising at a subtle pace, wonderfully restrained for a three minute tune. What is gentle becomes almost a jig before the song is done, the producer leaving the explosions for another time.

Voytek is a finely sketched tale of war, Katharine Simner’s serene vocals counterpoint dark lyrics, all leading up to a most heavenly and moving instrumental break.

And Wintersleep should really be play listed all over the damn place. Timeshifting, swaying, elastic it slips across three or four moods from thoughtful funeral to shy invitation to dance and ends way too soon.

As a prologue to a full album, this is a delightful introduction to band that we will be hearing a great deal more of.

Hear tracks from this release on the NBT podcast